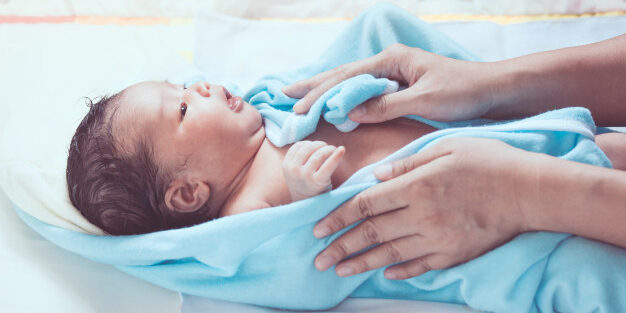 Umbilical Cord Care
Our recommendations are to just leave the cord as it is until it falls off on its own. This typically happens around two weeks of life. Sometimes, after the cord has fallen off, a small yellow discharge is often present or bits of dried blood. This can be safely cleaned with an alcohol swab. Occasionally, some red, beefy tissue called granulation tissue is noted at the base of the umbilicus. This usually resolves spontaneously but if it is growing, it should be treated in the office with a topical sealant called silver nitrate.

Bathing
After the umbilical cord has fallen off, you may submerge your baby in water and start giving baths. Babies do not have the same sweat glands as adults and do not need baths every day. Every 2-3 days is usually sufficient for infants.

Nails
Long nails in babies can be a source for scratches on the face. It is safe to cut a newborns nails, but you need to take extra caution to trim just those edges which overhang and cause scratching. Sometimes, to avoid cutting the skin behind the nail, it is easiest to just file the nails. Some babies are born with long nails, and some do not need to have their nails cut for 6 months.